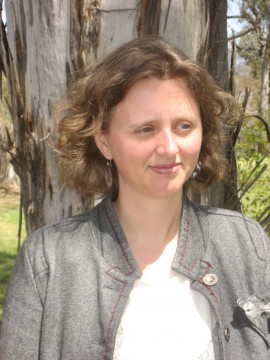 Dr Corrina Bonshek is an Australian composer whose music is inspired by sounds and patterns in nature and her meditation practice. Her music has been described as ‘beautifully shaped and contemplative’ (Clare MacClean, 2013) and ‘deeply spiritual in intent’ (Anne Boyd, 2002). She graduated with a PhD in Contemporary Arts in 2007 from University of Western Sydney, where she was the first music postgraduate to divide her submission equally between a composition portfolio and musicological thesis. She studied composition with Dr Bruce Crossman, and has since received mentoring from Grawemeyer award-winning composer Professor Chinary Ung, who describes her music as ‘connecting to the essence of South-East Asian music – timelessness’.

Corrina’s music has been performed around the world (USA, Indian, Thailand, Taiwan, Cambodia, UK and Australia) in concert halls, galleries, parks and non-arts venues. She recently composed and directed 90-minute Song to the Earth, a live music installation for string orchestra and percussion for 2018 Bleach Festival & Gold Coast Commonwealth Games Arts & Culture Festival. Her site-specific work Journey to the Centre is permanently installed in Centennial Park Sydney’s new public labyrinth and can be heard by streaming or downloading the audio onto your mobile phone. There were 5,000 downloads of this piece in the first year, and was featured on ABC TV The Compass Program, ABC Radio National Off Track and is the subject of a 30-minute radio feature for ABC Radio National’s The Rhythm Divine called The Labyrinth meditation (available as a download).

She was finalist in the 2018 Australia Art Music Awards – Instrumental Work of the Year Category for Up in the Clouds (premiered by All of the Above in USA), resident composer at 2015 Experimental Thai Music Laboratory at Burapha University in Thailand, inaugural visiting scholar at Nirmita Composers Institute in Cambodia in 2016, and composed music for Little Giant Chinese Chamber Orchestra for 2017 Taipei International Arts Festival.

Her cross-art form collaborations include As Small Birds Play cinematic installation (film by Rachael Jones, clarinet by Sue Newsome – pictured) for Centennial Park’s 125 years anniversary event ‘The Light Garden’ (2013), which was attended by over 29,000 people; Shadows and Dreams at the Female Orphan School, a 60 minute music-art tour through a treasured heritage building, presented in a ten-show season as part of the 2005 National Trust Heritage Festival; Project Reverie (2011-12) audio-visual installation series with visual artist Anna Bonshek. Project Reverie was exhibited at the India Habitat Centre (Delhi), the DakshinaChitra Centre (Tamil Naidoo), and screened in New York, London, Sydney and Gold Coast.

Between 2000-2007, Corrina was a sessional lecturer/tutor in musicology at University Western Sydney. During this time she presented numerous papers on experimental music-theatre (including her own creative practice) at conferences including National Conference of Musicology Society of Australia, Symposium of the International Society of Musicology, Graduate Music Symposia of the Sydney Chapter of the Musicological Society, and the annual symposia of University of Western Sydney School of Arts. Corrina has written articles for Australian Music Centre’s Resonate Magazine, Cut Common, Body Space and Technology, Contemporary Music Review and published a chapter in The Big Fish: Consciousness as Structure, Body and Space (Rodolphi).

Since 2008, Corrina has worked in online marketing and is the cofounder of Australian natural health business Better Earthing.

For her musings on composing and creativity visit her blog