I fell in love with birdsong in 2008 when I moved close to Centennial Park, and Rainbow Lorrikeets began visiting my balcony garden.

At that time, I was taking a break from composing. The effort of finishing my PhD and left me depleted. The focus of my life had shifted, temporarily, away from music to establishing a new career in online marketing, a career that would bring me the life balance I desired and a way to compose music and pay the rent too!

It was the birds in my environment that woke me up from my creative slumber: Rainbow Lorrikeets, Noisy Minors, Currawongs, Magpies, Mudlarks, Yellow-tailed Black Cockatoos and many more.

Since then bird calls have become a regular feature of my music. My first bird-inspired piece was As Small Birds Play, written in 2010 for bassoonist Sophie Rhee, and composed as a tribute to my favourite walk in Sydney’s Centennial Park, the path through the densely wooded Lachlan Swamp. The paperbark trees and surrounding swamp are home to many birds. Before the flying foxes moved in, it was a beautifully peaceful spot to sit and listen to the birds and watch the play of dappled light through the trees. 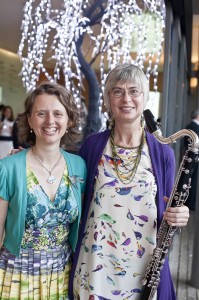 I think of As Small Birds Play as containing two types of music: lively melodies inspired by bird calls and bird movements; and, stillness suggested by slow, free-flowing phrases that symbolise a kind of deep tranquility or contemplative silence that is so easy to slip into while sitting in nature. My musical expression of that stillness is influenced by Japanese Gagaku with its free-flowing, breath-length phrasing. Together, they express a deep sense of peace of joy that comes from feeling at one with nature.

Fast forward to 2012 and I’m thrilled that As Small Birds Play for clarinet and audio (a soundscape of bird calls mixed by Benedict Carey) will be premiered at Centennial Park, the very place that inspired the piece. It will be performed by clarinettist Sue Newsome for an intimate private audience. In 2013, we’ll share piece with a broader audience in a brand new format – short film created by Rachael Jones.