Sydney ensemble Charisma will be premiering my piece ‘Out on the Wind’ for clarinet, cello and piano on Thursday 6 June 2013 at University of Technology Sydney as part of a concert of mostly Australian music.

The concert starts at 6:30pm on Thursday 6 June at Bon Marche Studio (Building 3), University of Technology Sydney, entry via Harris St. Entry is by donation.

Since forming in 1995, Charisma have gained an international reputation for lively and virtuosic music-making, receiving critical acclaim for tours in Australasia and Europe. Each of the performers – clarinettist Rosyln Dunlop, cellist Julia Ryder, and pianist David Miller – are highly accomplished in their field and teach performance at the Sydney Conservatorium of Music. I’m thrilled to have ‘Out on Wind’ premiered by them.

‘Out on the Wind’ is one of my birdsong-inspired pieces – the title refers to a bird floating on upcurrents as it crosses a valley. I completed this piece after receiving mentoring from Grawemayer award wining composer Chinary Ung as part of an Australian Council Grant. Those mentoring sessions really blew my mind and helped make my piece so much more magical!

Here’s my program note about Out on the Wind
While holidaying on the edge of Wollemi National Park in the Blue Mountains, I saw a bird glide slowly down into the valley below. I felt so joyful and at peace watching it that I felt compelled to write music. That afternoon I wrote the ‘gently, soaring’ Clarinet melody and the pinging ‘bell bird’ inspired Cello motives that begin this piece. Later, I added the Piano to complete the scene – its cycle of descending sustained chords evokes the vastness and tranquillity of the valley itself. 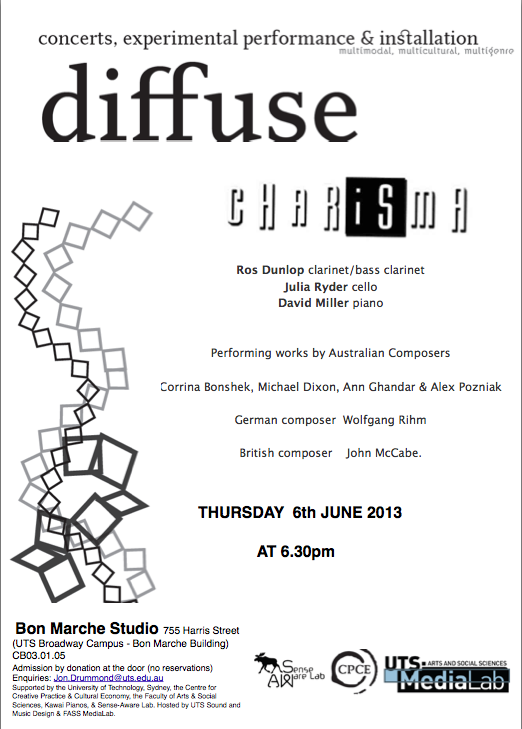