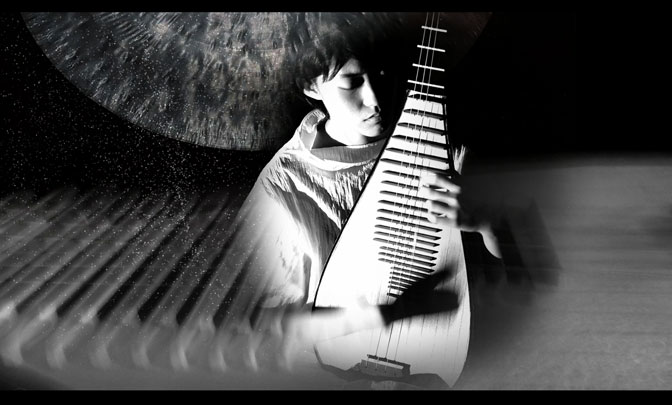 Laniakea – Hawaiian for immeasurable heavens – celebrates the connection between humans and the stars, the intimate and the infinite in the super-clusters of deep space. Film projections and live musicians are intertwined through shared imagery that includes the Pipa or Chinese Lute, a trajectory of human figures journeying in space, and active threads of light appear as diagrammatic trajectories of line that suggest molecular, cellular and cosmic space in constant momentum.

Composer Corrina Bonshek electroacoustic score is based on shifting timescales, where multiple versions of Pipa and Percussion music are heard simultaneously at different speeds in aural evocation of the expansion of our galaxy (spatialised by Anna Whitaker). Through deep and ongoing collaboration with Jasmine Chen and Michael Askill, Bonshek gives full expression to the dynamic energy and stillness of Chen’s virtuosic Pipa playing mirrored by Askill’s powerful and sensitive performance on gongs and metallic percussion.

Bonshek envisages the music as a dance of dynamic energy and reverberant stillness, a giant heartbeat that connects the audience to the infinite. She imagines the music as gapped clusters of live and electronically processed sound that will be drawn together and torn apart in an aural evocation of the velocity of stars over time. Before there was matter, there was sound in the form of the big bang. Our universe actually started with a song. What is the sound of the universe singing?

Daniel says: ‘We know that space is charged with energies and contains particles of very real matter. Our relationship to Nature, to natural space, to each other and to the environments we live in are thematics that repeat and recycle in my work. Human beings are standing wave patterns of energy – we are complex harmonics – our bodies seem solid, but from another frequency, we might look like filaments of light transmitting as energy fields. Ultimately our physical bodies are the products of wave actions in space. Space is porous, biomorphic.’ Read more in this Q&A with Belton.

This event is 40-minutes long and can be staged in black-box theatre, an art gallery, or be performed outside with projection-mapped digital film.

Special thanks to Joseph Ian Skeen Snr and Family (Paternal: Birri-Gubba, Maternal Kuku-Thapan) for use of his Boomerang in this production, and to Aunty Mary Graham, Yugambeh Elder, for creative and cultural consultation.

Industry showing September 25, Indoors at the Outdoor Space, HOTA Home of the Arts. Jasmine Chen (Pipa Musician/Performer) born in Kaohsiung, Taiwan, Yu-Rong Chen has forged a career as one of the leading pipa virtuosos of her generation. She completed her master studies at the National Taiwan University of Arts, Department of Music, under the instruction of Prof. Shou-Chou Lai and Ming-Xi Wang. She has toured to Alaska, Singapore, Malaysia, South Korea, Thailand and Guangxi, and was honoured as 2015 Young Star of Chinese Music, performing the premiere pipa concerto Yue Fei, The Valor at the Taiwan National Concert Hall. Chen has performed concertos with National Chinese Orchestra Taiwan, Taiwan Chinese Orchestra, Youth Orchestra and Hsinchu City Youth Chinese Orchestra, and these long-standing relationships had enriched her stage experience. Her distinguished charismatic, soulful and richly-hued playing is in high demand.

Michael Askill (PhD – University of Queensland) is a percussionist, composer, musical director, musical ambassador and educator – an icon of Australian music, known and admired for his enduring contribution to the Australian contemporary music landscape and his original blending of Asian and Western Sounds. Before embarking on a successful independent career, he was Principal Timpanist with the Melbourne Symphony and then Principal Percussionist with the Sydney Symphony Orchestra. His collaboration with one of Australia’s most highly respected choreographers, Graeme Murphy, resulted in a number of ballets including Free Radicals, Salome, Air and Other Invisible Forces for Sydney Dance Company. Michael is Percussionist Specialist at the Queensland Academy – Creative Industries Campus, Lecturer in Percussion at the University of Queensland and was a featured artist at the 2016 Australian Percussion Gathering held at the Queensland Conservatorium where he was awarded a Lifetime Achievement Award from the Percussive Arts Society.

Corrina Bonshek (Composer/Project Concept/ Co-Producer) is an Australian composer whose music has been described as ‘beautifully shaped and contemplative’ (Clare MacClean, 2013) and ‘connecting to the essence of SE Asian music – timelessness’ (Chinary Ung, 2015). Her practice is diverse from concert music to music-art events to collaborations with traditional instrumentalists from Asia. Corrina was a resident composer at the 2015 Experimental Thai Music Laboratory of Burapha University in Thailand, inaugural visiting scholar of 2016 Nirmita Institute for Young Composers in Cambodia, and composed music for Little Giant Chinese Chamber Orchestra for 2017 Taipei International Arts Festival. Her reworking of solo Pipa piece for American ensemble All of the Above was a finalist in 2018 Australian Art Music Awards – Instrumental Work of the Year category. She recently composed the 90-minute orchestral installation Song to the Earth for Gold Coast Commonwealth Games Arts & Culture Festival.